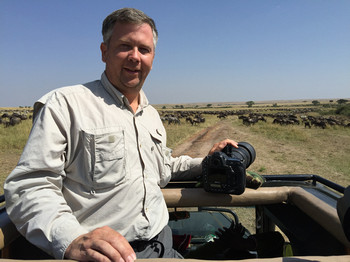 Until just a couple years ago, I was an insurance professional from Cleveland. It had always been my dream to go on a safari. So, one year I took the leap and went on one. And, almost in an instant, it changed my life.

My passion for these animals just took over. I loved watching them in the wild. Going into the experience, I was most excited about seeing the lions, but what surprised me was how much I enjoyed the elephants. They’re highly intelligent, even emotional creatures, and I came back from that experience transformed.

Then I heard the news about an elephant named Satao. He was a tusker, which means that his tusks hang down nearly to the ground – each one weighing in excess of 100 pounds. He’d lived for almost 50 years, surviving shifts in population, loss of habitat, and decades of political and social unrest. But he couldn’t survive one poison dart from a poacher. He was one of less than 20 of these animals left on the planet.

I never met Satao, but his death hit me on a deeply emotional level. I don’t know what the connection was, but it was real.

He and I were the same age, born in the same year, and his loss affected me in a way I could never have predicted.

I realized in that moment that I wanted to do something, to make a difference. And while I didn’t know what that was at the time, I decided to do what I could.

My research showed the best thing I could do to help create awareness of the threats facing the world’s wildlife was to get people over there to experience it for themselves. In some small way, my guests would become ambassadors for these animals. I believe one person can make a difference, and decided taking 6 people at a time would increase those odds.

And in the process, in my role as a wildlife ambassador, I discovered how to make a real difference in the lives of the animals under threat of extinction. I found I could do some real good…